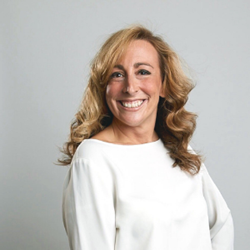 Kimberly Muller, Esq., is the executive director of CU Innovations, where she leads innovation for the University of Colorado Anschutz Medical Campus. Muller’s business development responsibilities include investing, company creation, innovation management, forming key strategic industry partnerships, and licensing. Large-scale industry collaborations have been established in areas such as AI and drug development. She also manages several funds, including an innovation grant fund and a $50 million venture fund.

Muller joined the University of Colorado from Yale University, where she was formerly the deputy director of the Yale Entrepreneurial Institute and managed new ventures in the Office of Cooperative Research. During her tenure, Yale’s Office of Cooperative Research started more than 70 new ventures that have raised over $5 billion in investor capital.

Previously, Muller started and sold companies in the biotech, tech and clean energy fields, including Curagen Corporation (acquired by Celldex Therapeutics), 454 Life Science (acquired by Roche), and Arbor Fuel (a biofuel company that utilized recombinant microorganisms for the production of ethanol and butanol). She began her career in New York as a patent attorney for Chadbourne and Parke, LLP.

Muller has a graduate degree in genetics, and received her law degree with highest honors from the University of Connecticut School of Law.

Office of the Chancellor CU Anschutz