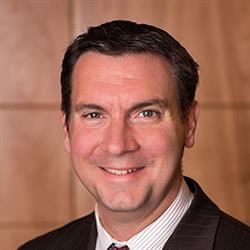 Scott Arthur brings 21 years of experience as a fundraising leader at major medical institutions and nonprofits to his role. Previously, he was the vice president of constituent giving at the Nationwide Children’s Hospital Foundation in Columbus, Ohio, the fourth-largest children’s hospital in the United States, where he led a major-giving program.

Prior to that, Arthur was a major gift officer for Mayo Clinic in Rochester Minnesota, perennially ranked among the top three medical centers in the United States.

“It is hard not to get excited about the future of the CU Anschutz Medical Campus and the role philanthropy will play in its evolution,” Arthur said. “Big ideas create great opportunities for community support, and CU Anschutz is not short on big ideas.”

At CU Anschutz, Arthur is charged with leading a team of about 60 fundraisers and support staff, with an annual goal exceeding $200 million. His expertise lies in creating more with less, using office values and culture to produce fundraising results.

Arthur received a master’s degree in nonprofit management from Case Western Reserve University and a bachelor’s degree from Otterbein College. He and his wife, Tricia, are both runners, and they have four children; Jackson, Sullivan, Anderson and Campbell Joy.

Office of the Chancellor CU Anschutz