On display at the Fulginiti Pavilion Art Gallery from September 22-December 20, 2022

"I have always been compelled to create work inspired by the nature’s geometries, particularly the self-similar, branching fractals in our brains: neurons. These discrete nerve cells are composed of dendrites, a series of radiating appendages that gather input from other neurons. I am struck by their visual movement, how they creep as they change form and communicate through neural pathways. These neural circuits interconnect to form a large-scale network in the brain—creating human consciousness, identity, and life as we know it."

"Neurons were discovered in 1887 by Santiago Ramon y Cajal, father of modern neuroscience. Since then, researchers have probed and mapped the brain with a vast array of sophisticated methods and technologies, from MRI scanners to molecular devices to unveil a beguiling architecture. Our perspective of the invisible world of the brain is entirely dependent upon the nature of these hidden processes, exclusively mediated by the technologies we have invented to image what takes place at an almost impossibly small scale and in the dark."

"These mediated images reveal chaotic systems and uncanny beauty. We can observe the brain’s familiar branching fractals in roots, electricity, rivers, and especially biology such as passages in the lungs, networks of arteries, and the nervous system. Intriguingly, in the  body,  neural fractals exist between dimensions. They can be considered objects with a dimensionality that is not an integer, meaning they are not three-dimensional like a cube or two-dimensional like a square. By existing between dimensions, the fractal networks can reach throughout the body’s volume without filling it up.  I investigate these dimensions between through formal exploration and material practice and seek to give form and understanding to human consciousness using new scanning technologies from neuroscience and the world of design."    Katie Caron

CU Associate Professor Maureen Stabio, PhD is a scientific collaborator in the development of Neuron Forest.  "I think most scientists, and particularly anatomists, have a soft spot for the arts.  We explore the human body because of its intrinsic beauty, its intricate design, and its awe-inspiring complexity. The hidden patterns and the logic bring a sense of order to an otherwise seemingly chaotic world.  These amazing branching patterns can bring us the same sense of harmony as a walk through nature (or a walk through a forest). " In fact, in March of 2022, the journal Nature published an article reporting that scientists’ ability to experience wonder, awe and beauty in their work is associated with higher levels of job satisfaction and better mental health.

View the story of how Neuron Forest was concieved and created. 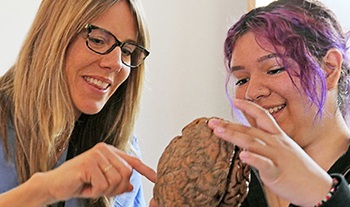 Katie Caron is Head of Ceramics and 3D Design at Arapahoe Community College. Caron graduated from Boston University in 2000 with a Bachelor of Science in English Education and minor in Theater Arts. After graduation, she decided to pursue her art full time and moved to Colorado. In 2007, Caron was accepted to the graduate program at Cranbrook Academy of Art in Michigan and graduated with a MFA in Ceramics.

She was reviewed for Drosscapes, an immersive environment, in Sculpture Magazine’s June 2013 issue and is profiled in Boulder Magazine in January 2017 issue for her body of work Autonomic Healing exhibited at Naropa University. Caron recently collaborated with the renowned Santa Fe art collective Meow Wolf, and is represented by William Havu Gallery.

Katie has established a Go Fund Me page to raise funds for this project.

Fulginiti Pavilion for Bioethics and Humanites